Home » Cancer » The Rick Simpson Story. What is Rick Simpson Oil?
CancerHeavy Toxic MetalsLaws That We Can’t Believe Are Real

Rick Simpson is a True Humanitarian and a Real Hero who rediscovered CANNABIS as the CURE FOR CANCER and many other diseases. Rick Simpson cured his own skin cancer called ‘Basal Cell Carcinoma’ USING 100% NATURAL THC (TetraHydroCannabinol) CONTAINING HEMP OIL. RUN FROM THE CURE is a Film By Christian Laurette that tells the story of Rick Simpson. After a serious head injury in 1997 Rick Simpson sought relief from his medical condition through the use of medicinal cannabis oil. When Rick discovered that the cannabis oil, with its high concentration of T.H.C. and C.B.D (CannaBiDiol) cured cancers and other illnesses.

What Is Rick Simpson Oil?
Rick Simpson Oil or RSO is named after a Canadian medical marijuana activist known for sharing a simple method for extracting oils from cannabis. He was motivated to share his technique after using cannabis oil to cure his own skin cancer. Since then, many have used cannabis oil in combination with lifestyle and diet changes to put their stage 4 cancer into remission. Rick Simpson Oil is dark in color and usually stored in syringes for easy dosing by mouth.

The story of Rick Simpson begins in 1969 when his 22-year-old cousin was diagnosed with cancer. After a surgery and chemotherapy, he from 200 pounds down to 120 pounds and doctors believed they had gotten rid of his cancer.

Three years later, Rick was talking to his cousin when he suddenly collapsed. After going back to the doctors they told him he had three to six months to live. Simpson claims his cousin dropped all the way down to 55 pounds and died only three months after that visit to the doctor.

It wasn’t long after the traumatic experience of losing his close family member that Rick Simpson heard about THC killing cancer cells on the radio. Due to the radio host laughing while covering the topic, Rick Simpson thought it was a hoax. He didn’t give THC another thought for years. Little did he know, he would end up becoming one of the most influential figures in the history of cannabis. 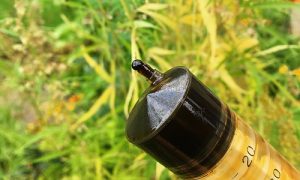 Before achieving fame in the cannabis world, Rick Simpson was working in a Canadian hospital. During that time he was exposed to asbestos which caused him to fall off a ladder, hit his head and pass out. When he woke up, he was taken to the emergency room by coworkers.

After his severe injury, he ended up with what doctors called post-concussion syndrome. It caused his head and ears to ring twenty-four hours a day with no aid from any medicines he was prescribed. After years of prescription medicines only making matters worse for him.

About a year after his injury Rick was watching a program on TV called “Reefer Madness 2” which showed people smoking cannabis for their medical problems and finding relief.

Fortunately, he had heard about the healing properties of cannabis and wanted to give it a try. However, his doctor did not approve and Rick decided to take action into his own hands. He acquired his own cannabis and was able to improve his ailments.

Years later, he was diagnosed with a form of skin cancer after getting three bumps checked out by a doctor. Fortunately, he heard about a study from the Journal of the National Cancer Institute that concluded cannabis impeded tumor growth in mice.

He already healed his symptoms in the past. The research he came across encouraged him to try it again. This time, he used cannabis oil topically, applying them with bandages.

On the fourth day, he removed his bandages to find the cancerous bumps were gone. Since then. Rick Simpson has been a firm believer in the healing capabilities of cannabis. He has shared his method in detail to help others suffering from cancer and other debilitating conditions.

Rick Simpson Oil is a whole plant extract that contains most of the components found in the plant. You will find plenty of other extracts on the shelves of dispensaries made with other methods.

However, they could be made with low-quality cannabis or consist of high concentrations of only one cannabinoid. As a result, you may end up paying for cannabis oil that is hardly beneficial. If you want to avoid this, you’re better off making your own RSO.

RSO is intended for people that don’t have access to high-quality cannabis oil and anecdotal evidence has found it to be beneficial among cancer patients. The equipment required can be found at home or they are relatively inexpensive to buy. The only thing that’ll cost you is the weed.

RSO is a made with specific solvents recommended by Rick Simpson like 99 percent isopropyl alcohol and ether.